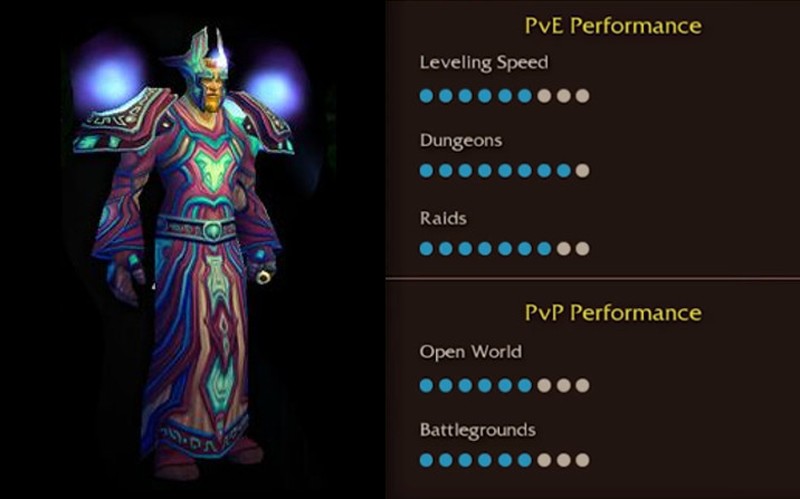 According to time-proven veterans of WoW, PVP during the vanilla days were broken, yet those times had a rather fun charm to them. Of course, the best classes (or overpowered, as some would argue) for this kind of content made the era memorable, for better or for worse. So, if you’re going to spend your WoW Classic gold, it should be on these classes.

The Fire Mage is an all-rounder. Aside from being a solid choice for PVP, it also churns out a ton of damage in late-game PVE. However, the talents for either specialty are different from one another, as the PVP fire mage will have to get a few frost talents for utility and survivability.

It’s why some would argue that it’s better to name this one as the Elemental PVP mage, as it’s not purely a fire talent build. However, a pure fire mage will never work in PVP. Plus, unlike the Frost Mage, which uses nothing but frost spells, this one uses fire spells–Pyroblast, Fire Blast, Blast Wave, and Scorch–to deal considerable amounts of damage.

The Frost Mage comes after the Fire Mage in this list not because it’s the second-best class for PVP, but simply so that you can easily compare it with the Fire Mage. It’s not really a hard thing to do: just don’t level up any Fire talents. As for the Frost talents, just don’t put any in Elemental Precision, Frost Warding, Frost Channeling, and Winter’s Chill.

While it doesn’t deal as much damage as its more elementally-balanced and more offensive-oriented Fire-imbued counterpart, it more than makes up for it with better survivability because of Arcane talents. At the end of the day, the choice of which Mage spec to choose for PVP boils down to preference. Just pick the one that suits the way you want to deal with your enemies and you’ll be completely fine.

The Horde’s answer to the Alliance’s Mage, the Elemental Shaman has mastery of all elements. It’s also not too shabby in the damage-dealing department either, as the class has the Elemental Mastery Ability, which gives your next Fire, Ice, or Nature spell a solid 100% strike chance. On top of that, it reduces mana cost by 100%.

The Elemental Shaman has one distinct advantage over the Alliance’s Mages, which is the ability to heal themselves and others. This makes them indispensable in PVP, where even a small bit of recuperation matters. At the same time, being both heavy damage dealers and secondary support makes them favorite targets in PVP, so be careful.

True to its name, the Destruction Warlock wrecks its enemies without any trouble, thanks to its focus on burst damage—specifically fire damage. For that, you’ll have to boost talents that increase the damage dealt by spells such as Immolate, Searing Pain, Conflagrate, and Soul Fire. The main damage-dealing combo is Soul Fire and Conflagrate, with a bit of Immolate for additional damage.

If that’s not enough, you can always use Shadowburn, which deals a massive amount of shadow damage, as a finisher. Using a succubus also helps, as she can use Seduction on your target, giving you the opportunity to finish him or her off with your combo easily and safely.

Last but definitely not least, for a bit of utility, you can put a little bit on either Demonic Embrace and Improved Healthstone, or into Amplify Curse, Improved Life Tap, Improved Drain Life, Suppression, and Nightfall. Improved Corruption, meanwhile, is a must.

Strangely enough, the other class that is also a vanilla WoW PVP mainstay is another spellcaster: the Priest. However, unlike the Mage, the two specs for priests (Holy and Shadow) are incomparable, as they have very different roles.

It should go without saying that the Holy Priest is a mainstay in all kinds of content, so it’s no surprise that it’s also an indispensable class in PVP. Some even pay WoW Classic Gold just to get one. There’s the bread-and-butter Holy Nova Talent, which will serve as both your offensive and healing spell, and the necessary Discipline talents.

As for the Shadow Priest, it is mostly focused on dealing damage. However, unlike the Mage, which is focused on either utility or less utility but more damage, the Shadow Priest deals non-elemental damage over time (Shadow Word: Pain) as well as a powerful yet pretty limited damage spell (Mind Blast). On top of that, the build also has utility that either slows down enemies (Mind Flay) or disables other spellcasters (Mana Burn).

There are many other ways the Shadow Priest can cripple and hurt its enemies, so it’s no surprise that the build is quite the icon among veterans.

Last but not least (because it’s the most notorious) is the Subtlety Rogue. It’s quite the killer because aside from its utility abilities that give it both an offensive and defensive edge (Vanish), its core skill (Eviscerate) deals lots of damage even without best-in-slot WoW Classic Items.

While the Subtlety Rogue has a good number of Assassination talents (Murder, Ruthlessness, Improved Eviscerate, and many others), it shines with Subtlety. Master of Deception, Elusiveness, and Camouflage all ensure that you’re hidden better and can disappear faster. Additionally, Initiative gives you a high chance to have an additional combo point.

WoW Classic is not vanilla WoW, but these classes are still worth trying in Blizzard’s re-envisioning of its MMO’s glory days. So, what are you waiting for? Dominate your fellow adventurers again with these classes.