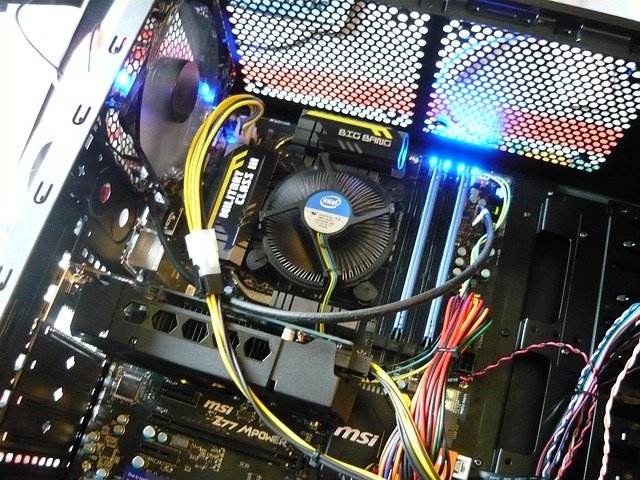 So, how hot should the CPU and GOU on your computer be while gaming? Under normal usage conditions, the CPU temperature should remain below 75°C/167°F. The temperature is likely to rise way above this when using the PC for more strenuous tasks like heavyweight video-editing, or gaming.

Several other things make a CPU/GPU more likely to overheat, including accumulation of dust, restricted airflow in the case, and overlooking settings. Depending on the actual cause of the problem, here are some remedies you may apply to lower the CPU/GPU temperature:

Over time, dust will accumulate on the inner components of your computer. When dust accumulates on the GPU, it forms an insulating layer that hinders the proper cooling of the component. Again, the accumulation of dust particles on the fans and other CPU components may also restrict airflow.

These will, in turn, cause the CPU to run hotter. This effect is even more significant in laptops as they only have limited space inside the casing. The best way to remove this layer of dust would be to just blow it away.

You can use a can of compressed air to blow the dust away, pay special attention to the fans. If it has been a while since you last cleaned the computer, you may also need to detach the graphics card from the motherboard and clean it using wipes.

The arrangement of cables in your gaming computer does not have to be perfect. However, leaving them scattered all over the casing can also hinder airflow. If you have cables hanging over the GPU and other vital components, the air flowing over them will not be able to cool them efficiently.

In such a case, you should consider rerouting the problematic cables, and if possible group them such that they are not hanging over the GPU. This allows for streamlined airflow over the GPU and other CPU components, which results in better cooling.

Thermal paste should be applied between the heat sink and CPU or GPU surfaces that are in contact. The paste is specially formulated to improve the conduction of heat away from the GPU/CPU by the heat sink.

With time, the thermal paste will degrade and become less efficient at conducting heat. This may also cause the temperature to rise above the normal CPU temp while gaming. To lower temperature, you need to remove the degraded layer of thermal paste and apply a new layer.

The following steps will help you accomplish that:

Step 1: Get Rid of the Degraded Thermal Paste

Follow the instructions on your user manual to uninstall the fan/cooler, and then the heat sink from the top of the CPU/GPU. Using a razor blade, gently scrape off the left-over thermal paste from both the heat sink and the CPU/GPU surfaces. You should then use a piece of cloth dampened with 90% isopropyl alcohol to wipe the two surfaces clean.

Having cleaned the surfaces thoroughly, apply a pea-sized drop of the paste onto the back surface of the CPU. Next, you should reinstall the heat sink and cooler onto the CPU and fasten them accordingly. The pressure applied while fastening will spread the thermal paste evenly over the two surfaces.

If the above-described methods do not help lower the CPU temperature, you should consider upgrading to a better cooling solution,  like the best CPU cooler for i9 9900k. In this regard, buying a good aftermarket GPU fan will do the trick. If you can afford it, a GPU water cooling system will serve you even better.

There are several things that can disrupt the airflow inside your CPU case. If this happens, you may end up having dead spots, where the air is not flowing as efficiently as it should. Depending on the prevailing problem, different solutions may be applied to facilitate proper airflow, including:

Get a New, More Ventilated  Case

Your computer casing may not be well ventilated to sustain the required airflow for efficient cooling of the CPU. If so, you should consider acquiring a larger case that is well ventilated to boost airflow around the vital components.

To know whether you require a larger case, you may carry out the ‘Open Case Test’. Try playing games on the computer for some time, and allow the GPU to run for 5 to 10 minutes with the case closed. After this period, check and record the CPU/GPU temperature readings.

Overlooking involves the calibration of the memory and CPU on a computer to increase the clock rate, beyond the speed recommended by the manufacturer. By so doing, the operating voltage for the CPU will also increase accordingly to sustain the improved performance.

While this is an improvement, it will also cause the CPU to generate more heat. This being the case, it is not advisable to overlook your gaming computer until you upgrade the cooling system. For Overlooking settings to work, you need to invest in a good aftermarket GOU fan, or better still a water cooling system.

If you do not have such, Overlooking will only cause the CPU to overheat. To fix the problem, you should disable the overlooking settings. If you are still getting high CPU temperature readings after resetting the clocks to default, you may need to ‘Underlock’ the GPU.