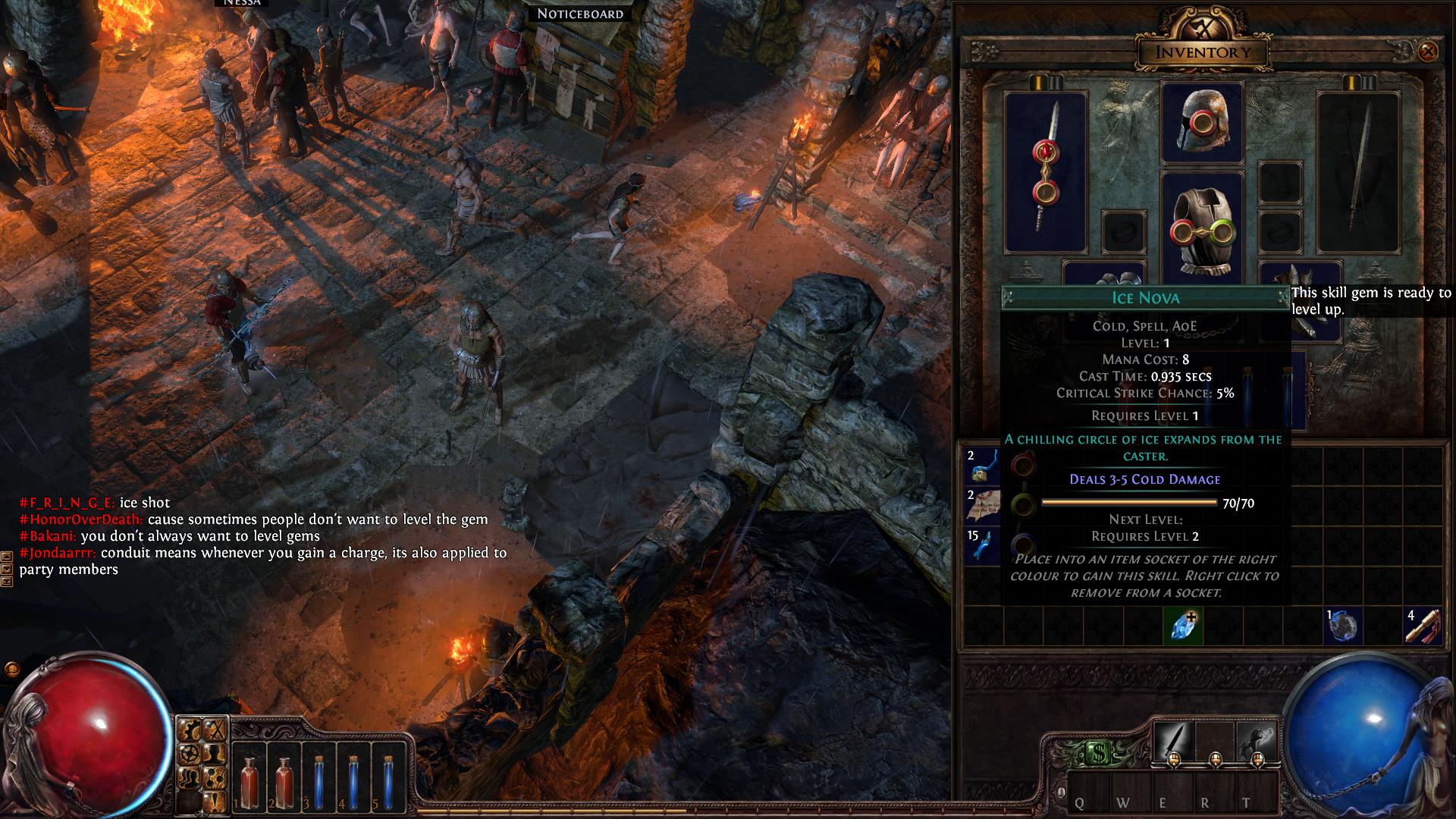 Because of Path of Exile’s unique approach to active and passive skills, you get to have a lot of customizability for your character. However, the drawback to that is if you get new skill gems, be it for your own build or more PoE Currency, you’ll have to grind all over again just to level them up. Thankfully, there’s an easy way to do that!

Before we go to the specific method necessary to level up gems quickly, let’s first discuss how they actually level up. It’s quite easy: you just put them in a socket on your equipped gear, and then they’ll automatically get XP equivalent to 10% of the XP you get from mobs. So, if you’re still trying to get to the level cap, you don’t need to worry. The XP gems get isn’t deducted from what you get as a player. Rather, they get a separate amount.

On a related note, since the gem XP gets is the tenth of the overall XP that your character gets, you can use gear with modifiers that increase XP gained to give your gems even more XP. You can either buy gear with this particular mod, farm for one, or use POE currency on viable gear until you finally get this much-needed mod.

Having said all that, you can also use a dedicated build for grinding gem XP. If you’re not going to take on mobs your level, then you can get cheap gear–even Magic ones–with this particular mod. Gear that grants increased quality to gems also increase XP. You can either farm until you get a piece of gear that has this mod. Unfortunately, you can only get items like this from Haku, Warmaster, one of the 12 Syndicate members. Lastly, if you’re not into farming in older content, you can also get one through the POE trade.

Grinding Those Gems Out

Unlike leveling your character, dying won’t result in your gems losing XP. Nevertheless, we still don’t recommend that you bite off more than you can chew just so you can gain XP faster. The hassle of dying and respawning ad nauseam will actually make things slower. Instead, stick to the map with the highest level of monsters (and therefore XP) that you can take on with ease.

Also, don’t be too daunted by the prospect of leveling up gems, especially when they’re still at low levels. If you’re already at the endgame, you’ll be surprised at how fast leveling up gems can be. Most of the time, leveling up gems is a passive process–just slap them on your gear and do whatever you’ve set out to do. Farming, leveling up, finishing content–your gems will just be leveling up in the background. This is especially true when doing endgame content.

Maybe you’re not using alternate weapons, which is understandable when your main weapon is already reliable enough to not need switching. However, if you want to level up gems that you will be using in the future or have no plans of using but want to trade later on, you’ll be using an alternate weapon. This is because it’s where you’ll be socketing gems you won’t be using but want to level up. It’s a rather simple trick that is quite effective.

It’s no surprise that flipping gems will be brought up in this topic. After all, we’re already discussing how to level gems fast, so you might as well do this particular trick! Plus, as a bonus, it’s a great way to make POE Currency out of grinding for gem levels.

Flipping means selling a level 20 gem and a Gemcutter’s prism (which is obtained by selling a level 20 gem) so that you can get a level 1 gem of the same kind with 20% quality in return. Higher quality means higher damage. The gem’s quality can then be further increased by corrupting it with a Vaal Orb.

As previously stated, it’s a great way to earn. Gemcutter’s prism, gems with 20% quality, and Vaal gems–they’re all in high demand in the POE trade. However, be careful in corrupting gems, as there’s a chance that you can just corrupt them without them becoming Vaal gems. You can still sell them and make a quick buck, but the problem with this is that the gems can no longer be upgraded to Vaal gems, and they can’t be rolled back either.

By unsuccessfully corrupting gems, only players looking for cheap gems that they can use will be your potential buyers, not those looking for a gem with 20% quality that they’re going to turn into their Vaal versions, and the latter is definitely more willing to spend more. Thus, you either settle for selling gems with 20% quality at most, or take your chances with a Vaal Orb and take a few losses but at the same time make much bank when you hit the jackpot.

Of course, you can also use the gems and the prism yourself, especially if the Vaal gem you’ll be using is crucial or highly helpful to your build. This is what you should do if you have plans of getting a Vaal gem of that kind and would like to save on the currencies you have. After all, you’ll be spending on it anyway, so why not get it for free?

Whether you’re going to grind for skill gems to earn or have a souped-up gem in your arsenal, we hope that these tips helped you in getting those gems maxed. So, what are you waiting for? Get out there and start grinding!