Since the release of Minecraft, it has been a long time. The game found its fans who regularly enjoy the game. You can find thousands of Minecraft videos on YouTube, but they are mostly fan views and videos. But there are very few videos that explain how to solve the problem with crashes when launching the game. But this is not a big problem: today in this post we will discuss the main mistakes concerning the Minecraft crashes upon launch and how to deal with them.

Everyone who has seen Minecraft at least once knows that the game has no resource-intensive special effects and cool graphics. If you have any problems with the game, then it is unlikely due to the technical features of your computer, since still, the game can even run on Windows 7.

Most often, startup problems occur due to damaged files. How to solve this problem? First, delete the server folder located in the root of the game folder and replace it with a newer version. Another option is to add the Launcher.jar file, which is located in the same root folder with the game, to the exceptions of your antivirus.

Logs and Crashes During The Game

The most popular option that may cause problems with Minecraft is outdated drivers or the Java JDK. The solution is simple:

If Minecraft starts but is impossible to play due to severe delays, then you should optimize the graphics settings. For this, open “Settings”, go to the “Graphics Settings” item and configure the following parameters:

These are, in fact, the most “light” graphical configurations, in which the game should not be slowed down in any way. If even with this configuration, nothing has changed, then the problem is 99% in the Java JDK (the solution is described above).

You can often hear from players who had problems after installing some mods. The reason is that the add-on doesn’t fit your version of the game or just has broken files. Accordingly, we read the mod requirements and upgrade Minecraft to the required version or look for another version of this add-on.

Sometimes it happens that the Java configuration indicates some kind of restriction on RAM allocation for the game. This is very easy to verify and correct:

Often, minecraft errors spoil the pleasure of playing the game, especially if you don’t know how to fix them. The following are the most common problem situations: 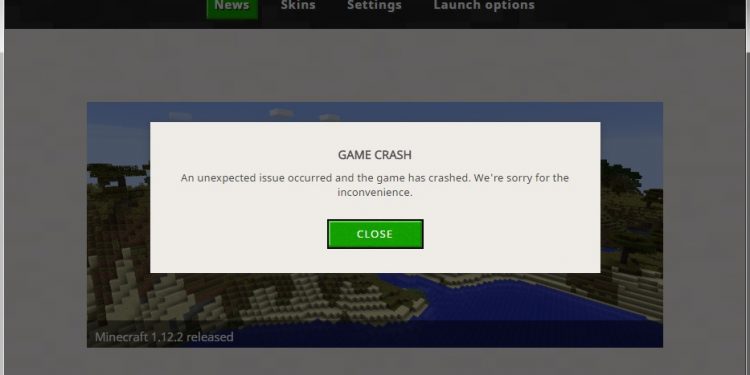 Why is Minecraft crashing?

The reasons are the bugs related to the game’s release. However, there are other bugs that cause Minecraft to crash. For example, a message “Defective video card drivers” remembers that the installed drivers are out of date; for the existing video card, you need to download new drivers. The message “No memory” means that there is little RAM, or too many programs are currently running.

Black Screen At The Launch of Minecraft

Sometimes when starting the game appears Minecraft black screen – indicates that a mod was installed that did not pass the authentication check. You can fix the error by simply deleting the folder from the META-INF file (the root folder is minecraft.jar).

Errors with the servers are also common, caused by the actions of the player or by the developers themselves (which is not uncommon in recent versions of Minecraft).

Minecraft sandbox is known all over the world. Despite the simplicity of the graphics, its gameplay is more than serious. What can I say if real parks, squares, and even entire settlements are created in the projects created in the game! The game continues to improve, but the release of modifications and updates is not complete without errors and failures. What to do if the game crashes at startup, or due to modifications, causing messages like Minecraft has crashed?

The game was created in the Java programming language, which in itself is already interesting. Game output can trigger modifications: its conflict or incorrect installation. Don’t forget just broken files and locked libraries. In general, there are many reasons. In most cases, these errors appear in versions 1.5.2 and 1.7.10. Now we proceed directly to the solution to the problem. : Game crash error “Minecraft has been blocked!”

The simplest and most effective method is to uninstall games along with modifications and their subsequent reinstallation. But if you’re not looking for easy ways, let’s try to restore what it is.

First, we’ll work with the system:

If a black screen crashes when Minecraft starts, the problem lies directly with the launcher.

At this point, the game detects lost files and exchanges them from the Internet. Of course, you need a network connection.

A black screen appears when the game version and mod do not match. Most often, it appears when you use add-ons for a newer version of Minecraft. Consequently, it is necessary to eliminate interference.

Was everything perfect before the modifications were installed? Don’t rush to wash the game; you may just need to set it up correctly.

Then, in the event of a change conflict, a window appears with an error log before the user. We’re interested in the bottom, after the line. “START ERROR REPORT …”. In case of modulation conflicts, look for the line. “… IllegalArgumentException Slot …” – after “Slot” is indicated a block, for which 2 mods claim at the same time. The line may look different: “… ArrayIndexOutOfBoundsException …”, and then the slot numbers are indicated. If there are no such clarifications, then the error itself forges or does not match the game version/mod.

To change the slot, you must go to the game folder and perform the following manipulations.

These methods describe the solution to the main sources of in-game problems. Of course, it is impossible to consider all the errors in an article, because there are a lot of them. In any case, if your Minecraft crashes with a black screen error, or “Minecraft has been locked”, the first thing is to check these items.

Minecraft has recently become a very popular game, in which even some adults do not mind bombing. However, since this sandbox does not work as a regular game for us, but through Java, sometimes players have problems with it. If you have any comments or suggestions, please write below in the comments.