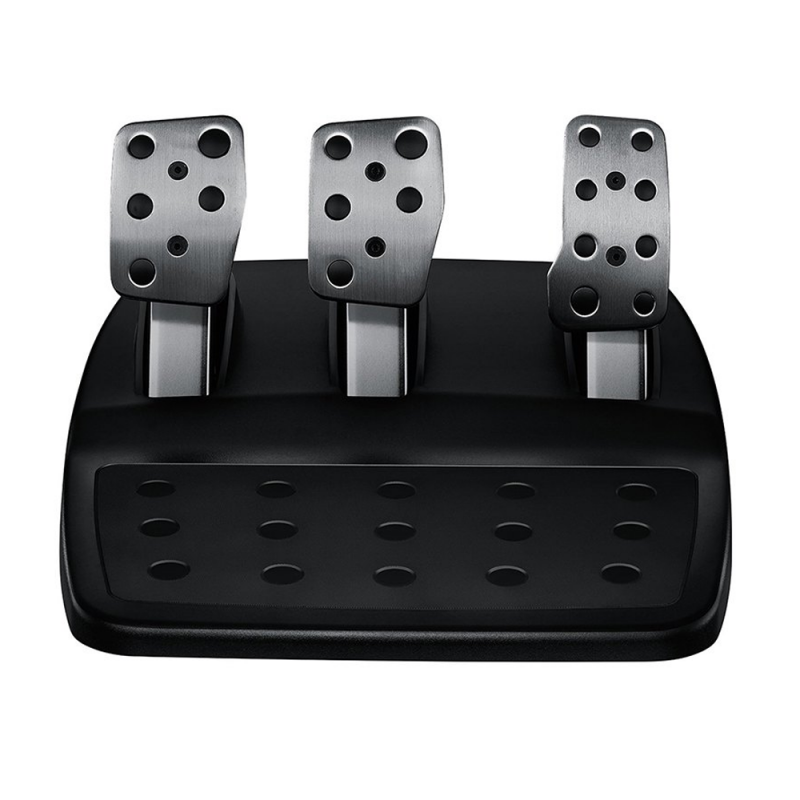 Any seasoned gamer can attest to the fact that a steering wheel and pedals make console driving and racing games feel more realistic. In this regard, Logitech G920 and Thrustmaster TMX Pro are some of the best entry-level racing wheels available for PC and Xbox games.

Both wheels feature a clutch pedal as well as a brake mode that is known to offer a more realistic braking experience. Though designed to do more or less the same thing, the two racing wheels doffer from each other in several ways. The Thrustmaster TMX Pro is the best budget racing wheel, especially for Xbox consoles.

The Logitech G920, on the other hand, is best suited for use on PC and Xbox One games. Both options feature Force Feedback, but the force feedback on the TMX Pro is belt-driven for a smoother feel. Throughout this guide, you will learn how the Logitech G920 compares to the Thrustmaster TMX pro racing wheel.

The Thrustmaster TMX Pro is priced at about $240, making the Logitech G920—priced at about $215—the cheaper option. The pedals on the TMX Pro are superior to those on the G920, capable of detecting up to 4,096 unique positions.

The G920, on the other hand, boasts better build quality, durability, and aesthetics. Both wheels come with a floor pedal unit with three pedals in each case. This makes them a great choice for games that support a clutch. While the TMX pro uses a belt-pulley Force Feedback system, the G920 features dual-motor force feedback—which is more realistic and precise.

The Logitech G920 is an exceptional racing wheel that is designed to offer gamers advanced driving simulation and realism. The G920 Driving Force Racing Wheel and pedals are suited for Xbox One, Xbox X|S, and several PC racing titles. The product offers a superior blend of quality and performance.

The wheel features a hand-stitched leather cover, coupled to a directional stripe and allows for up to 900 degrees of wheel rotation. The shifter paddles on this product are made of stainless steel while the throttle, brake, and clutch are made of automotive-grade rolled steel.

The G920 also comes with high-strength mounting clamps. These secure it to the floor for enhanced stability while you are racing. The console and D-pad controls on the wheel are conveniently positioned, such that they are easy to reach with your figures.

Though a great racing wheel, the Logitech G920 is not compatible with PlayStation 4 consoles.

What is Thrustmaster TMX Pro?

This is one of the best budget racing wheels available today, offering the immersion and realism you need for most Xbox One and PC racing titles. The Force Feedback feature on this wheel is just as effective and responsive as the one on but is comparatively silent.

As a matter of fact, the TMX Pro is said to offer an experience somewhat close to that of real-world racing. It features a rather ergonomic design and is adaptable enough to suit different racing game styles, including GT, NASCAR, F1, and Rally.

With regards to construction materials, the sequential paddle shifters on this product are made of metal. Just as is the case with the G920, the TMX Pro can rotate up to 900°, which is about 2.5 complete rotations of the wheel for precise control.

The Force Feedback functionality on the TMX pro is not as strong as the one on the Logitech G920 racing wheel.

Similarities and Differences Between Thrustmaster TMX Pro and Logitech G920

As mentioned earlier, the TMX pro and G920 racing simulators are priced differently, with the TMX pro being costlier. Though the functionality may be somewhat similar, the two racing wheels are different in many ways, ranging from design and construction to performance, as explained below:

Both the Thrustmaster TMX pro and the Logitech G920 racing wheels offer a rotation range of up to 900 degrees. With the G920, you get a 900-degree lock-to-lock rotation, meaning that you can rotate the wheel about two and half times. This is essentially the same range of motion offered by the steering wheel in most racing cars today.

The rotation range offered by the TMX pro is more or less the same—from 270° to 900°. This extended range of motion allows gamers to be more precise in different racing environments. With Logitech, however, you will also get a visual cue, a visual indicator stripe, on the steering wheel.

This lets you know which direction is pointing at all times. Well, this feature is not available on the TMX pro wheel.

With regards to construction and material quality, Logitech G920 is the wheel of choice. The Logitech Driving Force wheel is designed to offer enhanced grip, comfort, and durability. It features stainless steel paddle shifters and pedals, and solid steel ball bearings.

For enhanced comfort and grip, the G920 wheel is covered in high-quality, hand-stitched leather. This has been proven to offer a premium sports car feel. The TMX pro, on the other hand, is made of rather cheap materials and is not as durable as the G920.

The Thrustmaster TMX pro wheel is made of plastic, and features reinforced rubber-coated grips. The wheel-mounted sequential paddle shifters on this model, however, are made of 100% metal.

Both racing wheels are bundled with a 3-pedal floor pedal set. In both cases, you will be able to accelerate, change gears, and brake with a feel of an actual car. Again, the two racing wheel options allow you to adjust several aspects of the pedals for a personalized experience, as illustrated below:

The TMX pro comes with a three-pedal Thrustmaster T3PA pedal set. The pedals and their internal structure are made of 100% metal for extended durability. You will find this T3PA pedal set it be fully adjustable—the gas features an adjustable height setting, and you can also adjust the angle and spacing of the pedals.

With such settings, you can easily reconfigure the pedal faces to allow for easier heel-toe maneuvers and finer control in various scenarios. The TMX pro simulator also comes with an optional Conical Rubber Brake Mod. This allows for a realistic feel, with ultra-progressive resistance towards the end of the pedal travel.

The floor pedal set is equipped with a retractable carpet grip system and rubber feet to ensure that the pedals do not move dusting operations.

The Logitech G920 racing wheel is bundled with a set of three pedals. The G920 pedals are highly-responsive and may be adjusted to suit different preferences. The separate floor pedal unit offered by Logitech features brake, throttle and clutch pedals.

You can adjust the pedals individually to help you maintain a more realistic driving body position. The unit has a nonlinear brake pedal that imitates the operation of a pressure-sensitive brake system. According to most gamers, this results in a more responsive, and precise braking performance.

The G920 Driving Force pedal base is fitted with rubber feet for use on hard surfaces. Additionally, the unit features a patented retractable carpet grip system that secures the pedal unit in place during operation.

Both racing wheel models produce force feedback effects to make you feel like you are driving a real car. However, the force feedback system in these products differs a bit, as explained below:

The system itself is rather adaptable—featuring a number of power adjustment options. In its functioning, the system channels sounds from the motor, while offering  the player a feeling of smoothness. With such a system, you can easily maneuver with the level of precision required for each game.

As opposed to the Thrustmaster TMX pro, the G920 is equipped with a dual-motor force feedback system. This system is mainly designed to help you feel the car tires on every terrain type and turn. This, in turn, helps gamers to send an over or understeer drifting with precision.

The dual-motor force feedback is more powerful than the belt-pulley force feedback system on the TMX pro. With the G920, you get to feel every tire slip and weight in relation to the road conditions that caused it.

By simulating the feedback realistically, the Logitech G920 force feedback system allows you respond accurately and immediately. The system is coupled to a helical gearing system, allowing for quiet and smooth operation in all environments.

Both the Logitech G920 and the Thrustmaster TMX pro racing wheels feature an ergonomic design. In both cases, the controls are conveniently positioned to allow for easy reach, without having to move your hands or shift your position.

The TMX pro, for instance, as the official Xbox One buttons—including the Xbox Guide, Menu and View buttons—built-in to the wheel. Again, this model also offers easy access to all social functions. This makes it for you to navigate through the console menus or even switch between games without having to move your hands away from the wheel. Similarly, the G920 has all the necessary controls mounted onto the wheel.

In this regard, the buttons, paddle shifters and D-pad are all mounted onto the G90 racing wheel. The wheel also has an integrated LED indicator that notifies you when you need to down or up shirt so as to maintain maximum acceleration. You can tune your gaming preferences further using the 24-point selection dial and the +/- buttons on the G920 wheel.

Just as is the case with most real-life racing cars, the two racing wheel models are fitted with convenient paddle shifters. With the TMX pro, you get two large sequential paddle shifters that have been crafted from 100% metal.

The shifters feature an ergonomic design and are conveniently positioned for efficient shifting and excellent handling. Sequential gear shifts on the Logitech G920 wheel can be accomplished using the large (5” tall) wheel-mounted sequential paddle shifters.

The TMX pro construction and build quality are really poor as compared to those of the Logitech G920. However, it offers some of the most realistic feedback effects you can get within this price range. The Logitech G920 is older, hence lacks some features an avid gamer would need.

Even so, the Logitech G920 is a great racing wheel for Xbox One compatibility. The G920 will offer you a unique blend of quality and performance for an affordable price.