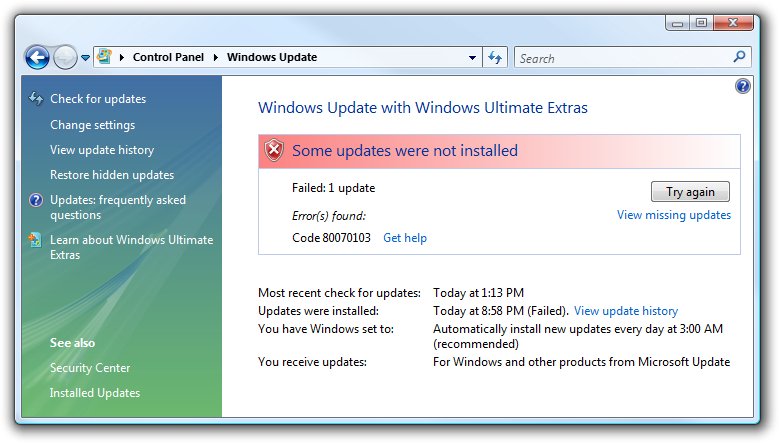 Installing the latest updates for your operating system is essential to ensure its security and smooth functionality. However, if you try to update Windows but get Windows Update error 80070103 instead, it can be quite frustrating, especially when you are presented with very few details about the reason for the update.

Error 80070103 is essentially not really serious. It can best be categorized as a warning, so you have little reason to worry. In most cases, the error is related to the end-user or the system trying to install a device driver that is already installed on the system.

Every Windows user likely knows that the Update Center built into the operating system is responsible for automatically searching and installing drivers for newly connected devices. From time to time, the drivers contained in the Microsoft database receive new versions, and then your operating system reports an update.

Unfortunately, during the installation of such updates, you can see error code 80070103, and the process will be interrupted. In this article, we will examine what these problems are associated with and how to fix error 80070103. It can also mean that Windows Update is trying to install a device driver that’s older than the driver currently installed on your computer, among many other things.

Firstly, that this very update center has downloaded from its database and is trying to install the version of the driver for a specific device that is already installed on the system. A similar attempt to replace the files with the exact ones will eventually result in a message that an unknown error has occurred, and the update has not been installed. The code for this message is 80070103.

Secondly, the message that an unknown error occurred, the update will not be stopped, and error code 80070103 indicates that Update Center tried to install a newer version of the driver, which for one reason or another, is incompatible with the version of Windows on your computer. On how to fix such a mistake, we will consider below.

In order to fix this error, we recommend that you slightly review the settings of the Windows operating system, and in particular, the Update Center. Since error 80070103 is related to updating drivers, it’s worth repeating the truth that driver updates for various components of your PC should not be trusted in automation, but should be done manually and manually, using files placed on official manufacturers’ sites. This will surely save you from the appearance of error 80070103.

It is much more reliable to download driver updates manually from the manufacturer’s website of a specific component of your PC. This update method has only one drawback – you won’t be able to find out about the driver updates automatically.

But at the same time, installing driver updates manually, you will always be sure that you are installing the most recent version and that it is compatible directly with your version of Windows. This will help avoid the reappearance of error 80070103.